Average annual growth in house prices in England and Wales over the next three months (February to April 2020) is on course to reach 4.3%, according to the reallymoving House Price Forecast February 2020. This will be the highest level seen since same period just prior to the EU Referendum (February to April 2016) when average annual growth hit 4.5%.

Price rises are also evident in the monthly data, with growing confidence and optimism among buyers in January resulting in a 4.3% monthly increase in average house prices forecast for April 2020 when those New Year deals complete. 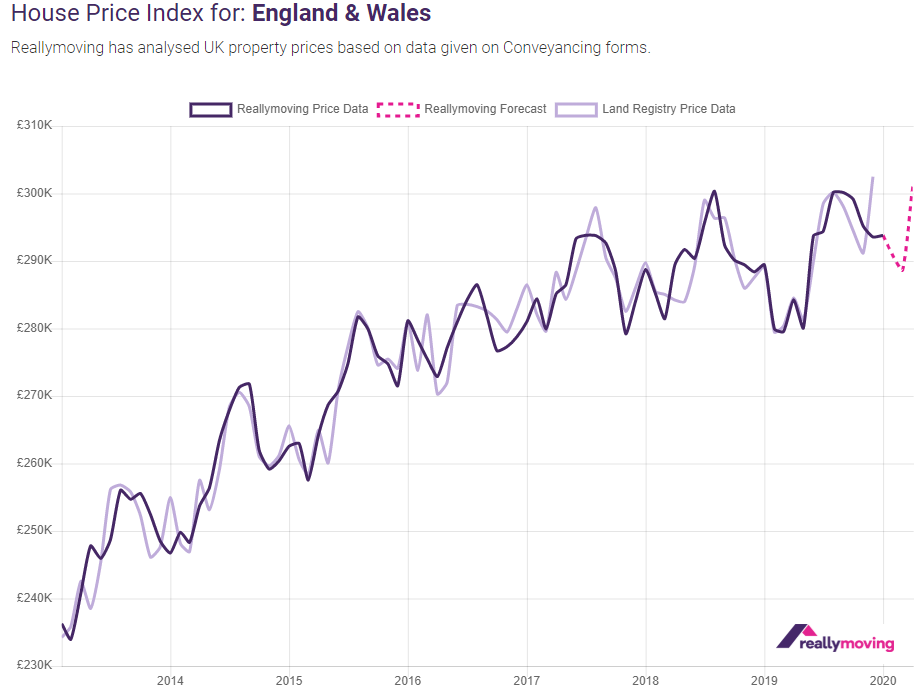 Growing confidence among buyers and sellers following the General Election result and its implications for Brexit is rapidly translating to greater competition among buyers, prompting increases in the value of deals agreed.

Year on year price growth for the next three months will average 4.3%, the highest level seen since the same period in 2016 (February to April), just ahead of the EU Referendum. This suggests that the worst of the Brexit-related malaise in the property market could be over, at least for the time being, with house price growth in England and Wales enjoying a period of more consistent and sustained growth well into the spring.

Annual growth of 5.9% in April 2020 will be the largest year-on-year increase recorded since March 2016 when house prices in England and Wales rose 7% year on year.

“Our forecasts for annual growth indicate that we’re on course to see the strongest period of year on year price increases since just prior to the EU Referendum in 2016.

“Growing certainty about the UK’s future direction following the General Election appears to be prompting the release of some of the pent-up demand in the market from buyers and sellers who have adopted a policy of ‘wait and see’ over the last few months. This surge of optimism is clearly evident in sales agreed in January, which we anticipate will be visible in Land Registry data in April.

“However, if trade talks between the UK and the EU fail to progress well this brighter outlook for the housing market could be short-lived, in which case this spring could present the best window of opportunity to sell for some time.”