12 September 2019: Moving home costs in the UK have hit a record high of £10,414 in 2019, meaning homeowners buying and selling a property are having to dig deeper than ever before to move up the ladder, according to reallymoving’s annual Cost of Moving research, released today.

The UK’s leading comparison site for home move services has analysed data from 990,000 quotes in the last year to reveal that rising stamp duty bills (+4%) and conveyancing fees (+5%) are the key elements driving up costs for homeowners, which can be attributed to a marginal 1% annual rise in house prices. Stamp duty now makes up almost half (44%) of the total cost of a home move, rising to 65% in London.

Homeowners, who are both buying and selling, now pay on average £4,625 in stamp duty, based on the median property value, while conveyancing costs stand at £1,490 including Disbursements & Expenses, e.g. Land Registry fees. Although varying significantly depending on the distance of the move and the volume of possessions transported, removals charges have also increased by 1% over the last year to £480 on average. The cost of an Energy Performance Certificate (EPC) remains unchanged at £55, but other expenses have dipped slightly over the last year, such as a Homebuyers Report which now costs £408 (-4%) and estate agent fees at £3,356[1] (-1%) as suppliers compete for business in a contracted market that has seen transaction levels fall 12.4% year on year[2].

Home movers in London face the greatest cost of moving, with the upfront costs associated with buying and selling a home in the capital now at £24,585 – almost 2.5 times the UK average. With property prices in London following a downward trajectory in 2019,  homeowners are finding it harder to fund a move through growth in equity, therefore the high cost of moving is becoming increasingly prohibitive.

The South East, East and South West also rank among the most expensive regions for movers, with the East and West Midlands sitting in the centre of the table and Northern Ireland and the North East the least expensive locations as a result of lower house prices, enabling greater fluidity in the housing market (see Graph 1 below).

Cost of moving as a proportion of annual earnings

For the average home mover (buying and selling), upfront costs are now greater than one third of the median UK salary of £29,588.[3] Those without significant cash savings at their disposal are therefore forced to dip into their existing equity to cover moving expenses such as stamp duty, which poses a greater challenge while house prices are stagnant or falling. Consequently, in a flat housing market such as the UK has seen in 2019, moving home becomes more prohibitive despite an annual increase in overall costs of just 2%. 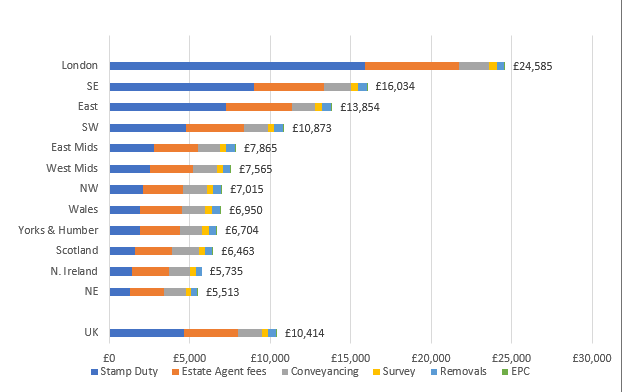 Graph 1: Regional cost of moving for homeowners in 2019 (Source: reallymoving)

“Homeowners are having to dig deeper than ever before to fund a home move, with upfront costs reaching another record high in 2019. A marginal annual increase in house prices has led to higher stamp duty and conveyancing bills, meaning movers now have to find almost £10,500 which is a significant chunk of cash to raise from property equity or personal savings, on top of their deposit.

“While first time buyers across most of the UK are benefiting from the stamp duty exemption, as a result of higher prices those in London are still having to find over £5,500 to fund a move, which is a daunting figure for anyone starting out on the path to home ownership.

“Stamp duty charges may be fixed, but it is possible to make savings on other costs such as conveyancing, surveys and removals by shopping around online for the best deals and comparing ratings and reviews, as well as price.”

[1] An average estate agent fee of 1.18% plus VAT has been assumed using data from The Advisory and based on reallymoving’s median sale price https://www.theadvisory.co.uk/estate-agents/fees-what-should-you-pay/