Mining-related Ground Instability – Could the Wednesbury ‘Sinkhole’ have been predicted?

The formation of a ‘sinkhole’ beneath a property in Wednesbury, West Midlands has received abundant coverage from the mainstream media during the last week. At Terrafirma, we have been looking into this event to try and understand more about its cause and wider context.

While there has been initial speculation as to the cause of the ‘sinkhole’, (click here to read news article) it is highly likely the cause is related to historic coal-mining activity. This is important, not just in the context of this region, but also nationwide due to the widespread nature of coal (and non-coal) extraction occurring across the UK. This suggests that such sinkholes are potentially a more widespread issue than their localised, or site-specific nature suggests. Further, adding in an UK extraction legacy that includes around 60 other types of rocks and minerals highlights the potential significance of the issue. 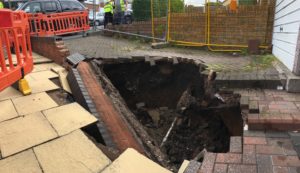 The good news is that while this may seem scary, the anthropogenic nature of these types of sinkhole events means they are not purely random and therefore can be anticipated with efficient and pragmatic desk-based studies. Data shows that the number of sinkholes in the UK are increasing, probably as they are being reported more efficiently.

However the relationship between these events and past mining activity is becoming increasing recognised. This is iterated in TerraFirma’s ethos and in a preliminary assessment of the Site of the 13th August Sinkhole, which shows that this event did not necessarily occur completely out of the blue.

Based on an initial study of the area – this sinkhole appears to be another event that follows this trend. Historical coal mining activity, associated with the nearby Vicarage Colliery, has left a significant, but largely hidden legacy of underground mine shafts and workings. The presence of a coal seam outcrop (Staffordshire Thick Coal Seam) beneath the site further supports this link. 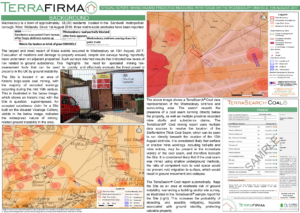 Our very own managing director, Tom Backhouse, happened to be in the area today and took the opportunity to talk to residents and those in the industry about the sinkhole and the importance of thorough risk assessment here, and across the UK. The TerraSearch® range of reports use a wide range of data sources combined with expert interpretation from our team of geologists and mining engineers to provide an appropriate ground stability risk assessment to property and land from historical mineral extraction. While no-one can ever directly predict such events, there are steps that can be taken during the conveyancing process that may help prevent such events occurring in the future. These professional recommendations, a key part of these reports, are arguably just as important to people, property and services as the hard data that supports them. The impact of geology on society is often larger than initially thought. While other geo-environmental risks, such as flood and contaminated land, have gathered larger attention, we should probably also consider the stability of the ground we all share.