Two-thirds of renters experienced disrepair issues with repairs taking 41 days on average, according to new research by Hodge Jones & Allen.

Housing disrepair is a prominent issue for social and private home renters up and down the country, with two thirds of tenants (66%) experiencing some sort of disrepair issue during their tenancy agreement, and repairs taking over a month – 41 days – on average.

Hodge Jones & Allen Solicitors surveyed 2,000 UK adults who have rented a residential property in the last five years to find out if they had experienced any issues, what the most common housing disrepair issues are across households, and the typical waiting time to get an issue fixed.

They also analysed the latest English Housing Survey report, and discovered that nearly half a million residential tenants report damp around their house each year, making it the most common issue. Over a third (37%) of those surveyed also claimed to have had some sort of damp issue within their rented property.

The bedroom was revealed to be the worst area of the house for disrepair issues with over half (58%) of the renters polled stating that their reported problem was located in this room.

London came out as the worst place for reported issues nationwide with eight in ten (79%) tenants living in the capital stating that they have experienced one or more disrepair issues. Manchester took second place on the table, with three quarters (76%) of the tenants living here experiencing at least one problem during a recent tenancy agreement.

Cities such as Leeds, Glasgow and Liverpool were all below the UK average (66%) but there is still a large majority of tenants reporting issues with the state of their property. 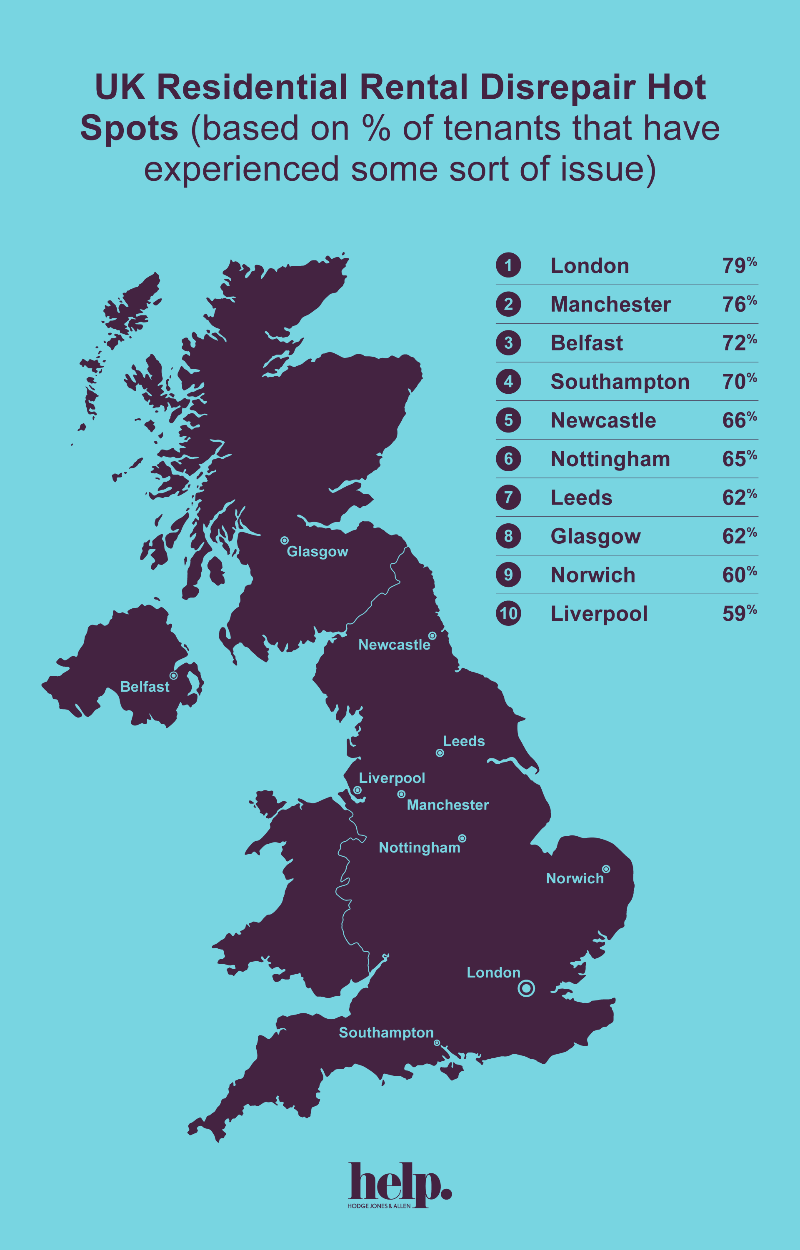 Promisingly, half of those polled stated that their disrepair issue was fixed within two weeks of it being reported. However, for over a fifth (22%) their wait was in excess of six months, and even more worrying one in six (18%) said their reported issue has never been fixed.

Tenants in Cardiff have had the greatest struggle getting issues repaired, with three in ten (29%) claiming their reported disrepair issue has never been fixed. This was also a common problem in Leeds and Southampton with a quarter of the tenants living here experiencing the same outcome.

The top 10 UK cities where the most tenants reported that their reported disrepair issue has not been fixed are:

“Our research reveals just how many people are living in properties that are not being properly maintained by their landlord. It’s worrying to see damp as the most common issue, as damp can cause health problems such as respiratory issues, respiratory infections, allergies or asthma. It also has the potential to affect the immune system.

“It’s shocking that renters are waiting 41 days on average for their reported issue to be fixed. Often the problem could be tackled relatively cheaply and quickly too. It is inevitable that issues may occur but if the landlord deals with these in a timely manner then the tenant is often satisfied.

“Anyone who has experienced a disrepair issue that has not been rectified, within a reasonable timeframe, could bring a claim for an order for the repair works to be carried out and for compensation. Our specialist team of housing law solicitors provide advice on bringing a claim and getting the best outcome possible for tenants.”

Find out what damages you may be entitled to receive due to your landlord’s failure to keep your home in a good state of repair, using HJA’s disrepair calculator: https://www.hja.net/legal-services/housing-help/disrepair-calculator/.