reallymoving House Price Forecast June 2020: prices to rise by 1.9% between June and September

reallymoving House Price Forecast June 2020: prices to rise by 1.9% between June and September with a surge following pandemic lockdown.

House prices in England and Wales are on track to rise by 1.9% between June and September, reflecting a surge in buyer demand post-lockdown, reports reallymoving in its June House Price Forecast June 2020, released today.

Comparing data collected from reallymoving’s conveyancing quote forms during the final month before lockdown (March) and the first full month post-lockdown (June), the market has bounced back strongly. This trend could be short-lived however, if the wider economy and jobs market struggle to emerge successfully from the unprecedented first phase of Government support. 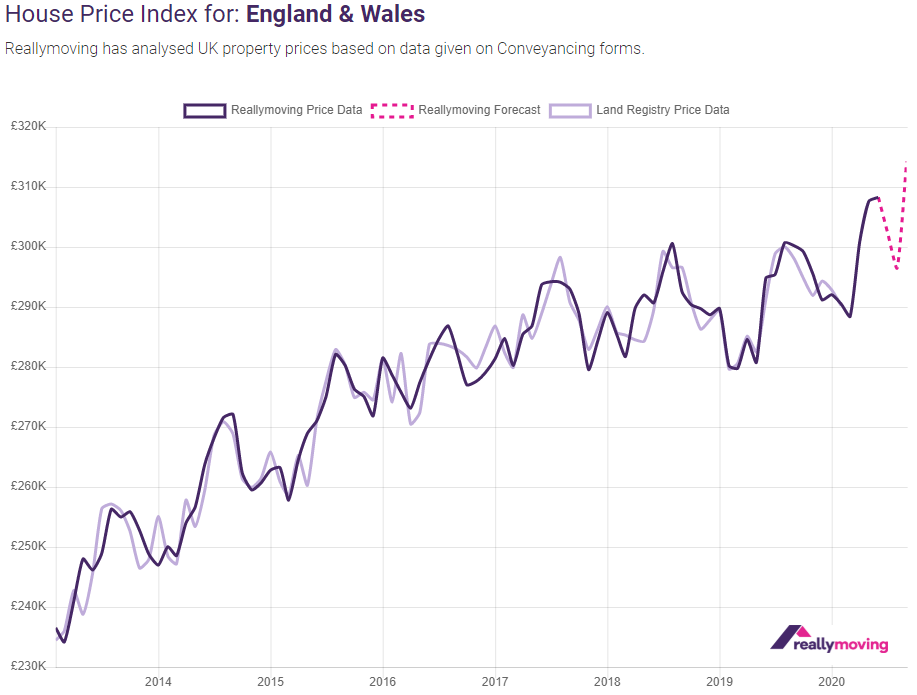 Average house prices in England and Wales will rise by 1.9% over the next three months from £308,280 in June to £314,235 in September 2020. Transaction volumes and prices agreed by buyers and sellers fell sharply immediately after lockdown, yet data on new sales agreed in June suggests that prices are on course to bounce back in September. While the wider economic outlook remains uncertain, announcements such as the temporary increase in the stamp duty threshold to £500,000 should help support activity levels and price growth in the short term.

Average prices are set to dip by 1.4% in August 2020, the first annual price fall in thirteen months (excluding data from April and May when transaction volumes were too low to be reliable), before returning to positive territory in September with 4.7% annual growth.

Despite the shock of lockdown, demand from buyers has been strong since the market reopened. In June 2020 reallymoving recorded the highest volume of conveyancing quotes since January 2018. This could be a consequence of people spending a significant amount of time at home, prompting them to reassess the suitability of their living space, gardens and location, as well as pent up demand that has remained in the market throughout Brexit.

“Buyers took a cautious approach when the housing market first reopened, but we’re now seeing a clear surge in activity levels and a corresponding rise in sale prices being agreed. There is little positive economic news on the horizon, but buyers who are confident in their jobs and financial position may be deciding to press ahead now rather than wait indefinitely – especially as many have already held off for months or even years awaiting a Brexit resolution. Low interest rates and the Chancellor’s stamp duty giveaway in England and Northern Ireland will encourage them further.

“The longer-term outlook of the housing market remains unclear though and much will rest on the success of the Government’s investment in job creation and economic support, particularly after the furlough scheme and mortgage payment holidays come to an end.”