NAEA Propertymark: Number of Homes Available up by 15 per cent 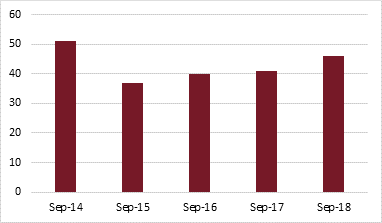 Sales to FTBs and sales agreed

“Buyers and sellers always tend to flood the market in September with the hope of completing their transactions before the festive period kicks off. Therefore, the summer is usually a good time for FTBs to enter negotiations and try to secure a property. However, this summer’s heatwave led to an unusually busy August as house buyers and sellers opted to stay at home rather than heading abroad for their summer holidays. This boosted competition and meant sales to FTBs were down. We hope that during next week’s Autumn Budget the Chancellor announces further measures to improve market conditions for FTBs. Ultimately, the only thing which will make the housing ladder more accessible is reduced competition, which comes down to supply.”