HomeTrack publish their latest UK Rental Market Report, giving their insights into the state of the market, based on Zoopla’s Rental Index.

Sharp rise in demand for rental properties in recent months, especially in central city markets, signalling the return of city life as offices and other leisure venues continue to open up more fully. 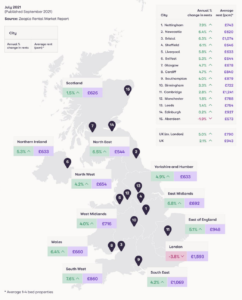 Average rents across the UK outside London rose by 5% over in the 12 months to the end of July, the biggest increase since Zoopla’s index began in 2008.

Rents have been pushed up by a resurgence in demand, especially in UK cities, over the summer, as the economy starts to open more fully, and university students look for accommodation as the new academic year begins.

Even such a strong level of rental growth has not kept pace with earnings growth however, with total average pay up 8.8% on the year according to official figures.

Yet the Office for National Statistics has warned that the earnings data has been affected by COVID trends, most notably the loss of lower-paid jobs, which may be putting undue upwards pressure on the earnings data.

The average monthly rent outside London is now at £790, up from £752 in July last year.

Meanwhile, rental growth in some cities and towns rose even further, with rental growth in Wigan and Mansfield reaching double figures, at 10.5% and 10% respectively. Hastings, Blackburn, Barnsley and Norwich are registering growth of 9.4% or more.

What unites all of these locations is that they remain some of the most affordable places to rent, with the proportion of income needed for a single earner to pay monthly rent below the UK average of 32%, falling to 21% in Wigan.

The surge in demand has also pushed rental growth back into positive territory in some of the UK’s largest cities over the last four months.

As offices, bars, restaurants, galleries, theatres and other city centre attractions have reopened, rental demand has risen and pushed up rents.

Average rents in Manchester Local Authority have risen by 1.4% in the last three months alone. Over the same time period rents in Birmingham LA are up 2.5%, Leeds up 1.9% and Edinburgh up 2.2%.

This marks the ‘swing back’ of the pendulum (discussed in previous rental reports) with renters returning to a city life more akin to that before COVID.

As a result, there has been a reversal of the decline in rental demand seen in the centre of cities during the teeth of the pandemic as renters moved back with family, or elsewhere in the country.

The same trends are even more apparent in the central London rental market, with a sharp rise in demand in recent months. Average rents in the 12 boroughs in inner London rose by 2.3% in the three months to July.

Across London as a whole, rental declines have now bottomed out, and the average rental change across London is -3.8%, compared to -9.8% in February this year.

The rental market is highly seasonal, and this is typically a busy period of year as students start university, graduates commence new jobs, families locate for the new school term and renters look for new accommodation after the summer.

But this August is unusually busy, with demand levels up nearly 80% on 2017-2019 averages, as pent-up demand from earlier in the year comes back to the market.

Rents are rising, as are earnings 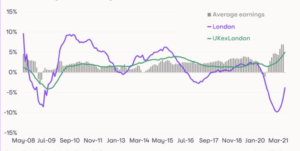 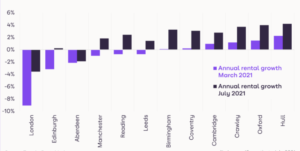 Demand not being matched by supply

In the year to date, rental demand is up 19% compared to last year, while the total stock of rental property is down 13%.

Examining August data in more detail however shows the scale of stock erosion which has been exacerbated by the pick-up in demand.

The total stock of homes available to rent across the UK is around 30% lower compared to normal levels for this time of year.

The rise in rental demand comes against a background of lower supply in the sector overall amid a decline in investment in the buy-to-let sector since the introduction of the additional 3% stamp duty in 2016.

The delivery of build-to-rent homes (built and operated by large institutional investors) is on a strong upward trajectory, but this segment of the market is still small, and not enough to plug the gap of landlords who have already pared back their portfolios.

As a result, supply is set to remain constrained across the UK, which will continue to put upwards pressure on rents.

In Scotland, where rental demand has risen most sharply in recent months, the demand and supply dynamics are likely to be affected by mooted policy around rent controls, which will give landlords an additional factor to take into consideration in the future.

However, at the same time, new legislation in Edinburgh is expected to increase the limitations on holiday lets, which could increase the supply of mainstream rented properties.

In another signal of the pick-up in activity as city life recommences, the average time to rent has fallen to a five-year low.

The average time between listing a rental property and agreeing a rental tenancy is now 15 days, down from more than 20 days in July last year.

The market is moving fastest in some coastal locations, where the rental demand has remained high over the last 12 months, such as Hastings, Worthing, Bournemouth and Plymouth, with the average let being agreed in just over a week.

But markets in large cities are also among the fastest moving, including Liverpool, Cardiff, York, Bristol and Newcastle with time to rent averaging under two weeks.

The strong levels of rental demand seen during August will moderate in line with seasonal trends, but overall demand for rental property is likely to remain higher than usual in the coming months, amid a swing back to city life.

As ever, much will be dependent on the extent to which the current rules around COVID continue as they are, but if they do, the demand for rental property, coupled with lower levels of supply, will continue to put upward pressure on rents.

In London, this will translate into rental growth returning to positive territory late 2021 or early 2022.

Change in rental demand and supply, year-to-date vs. 2020 average 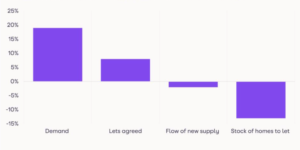