Coastal erosion is a hot topic at the moment, but it is nothing new. Groundsure have been thinking about coastal erosion for a long time.

back in 2015 our Head of Product Development, Dominic Tubb, wrote an interesting piece on coastal retreat at Birling Gap utilising our high resolution historical mapping. Fast forward to today, we’re proud that our suite of GeoRisk reports were the first conveyancing searches to include a property specific assessment of coastal erosion risk.

At Groundsure we pride ourselves on not just relying on third party data, but using our proprietary information and in-house expertise to provide useful and accurate insights for our customers.

Birling Gap is a popular tourist spot on the East Sussex coastline, set to the East of the famous ‘Seven Sisters’ white cliffs. It has, along with many areas of the UK coast, taken a battering in the recent run of Atlantic depressions sweeping across the country. The high winds, tidal swells and tumultuous sea state combined with extreme levels of rainfall have resulted in an increase in the frequency of noticeable coastal erosion, with large sections of the chalk cliffs falling away to the beach below. It has been stated that up to seven years’ worth of erosion has occurred in just the last two months. Even with the (relative) improvement in the recent weather large cracks1 are still appearing and dramatic cliff falls2 have continued to occur.

Erosion is a rather long-standing issue at Birling Gap. It has in fact been occurring to varying degrees ever since the chalk dome – of which the cliffs are a remnant – emerged from beneath a sub-tropical sea around 70 million years ago. However, the rate of erosion has only really become apparent in the time since permanent structures were built close to the cliffs’ edge.

The area is widely considered as an exceptionally active site of coastal erosion. The National Trust named Birling Gap as one of their ‘coastal hotspots’ at risk from climate change3 in the UK and is carrying out a policy of ‘managed retreat’4 at the site. This policy was put into practice by the Trust in February 2014 with the pre-emptive demolition of an ice cream parlour5 that had found itself perilously close to the cliff’s edge.

Over the years there have been many estimates made for the rate of coastal erosion at Birling Gap, but it is widely thought that between 60cm and 100cm is lost each year. Using Groundsure’s comprehensive collection of historical Ordnance Survey mapping it has been possible to test these estimates; by documenting the retreat of the cliff’s edge over the decades, from 1874 (the earliest OS mapping available for the site) to the present day. 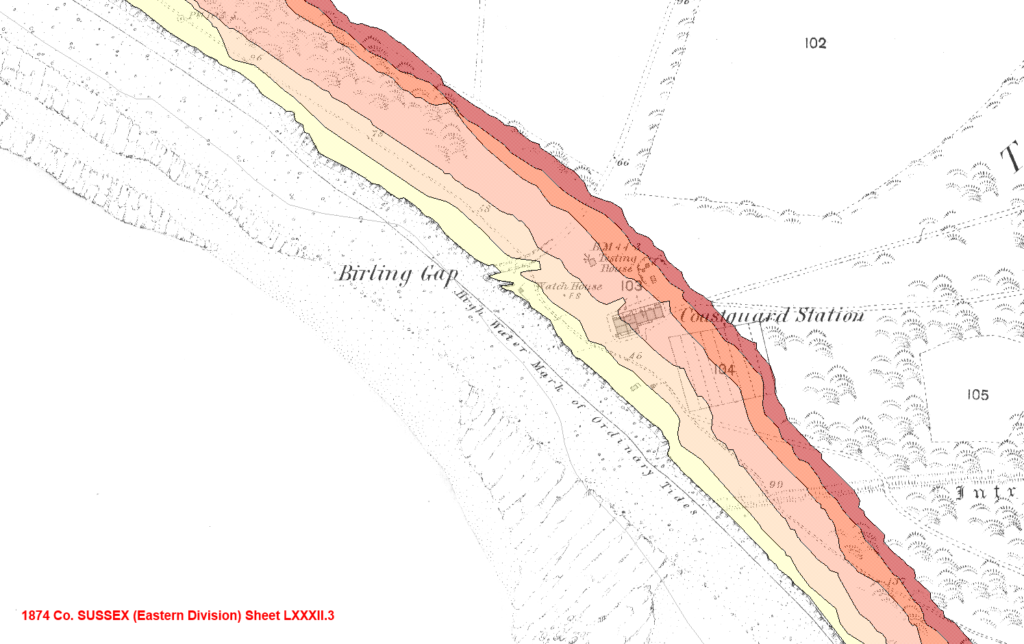 Using recurring features within the time sequence of historical mapping it was possible to geo-rectify the maps in relation to one another, and subsequently in relation to modern mapping. The chosen features were the ‘Testing’ or ‘Rocket’ House that is shown between 1874 and 1926 and, once that had met its demise, the hotel building that occurs in the sheets between 1926 and 2013.

After geo-rectification the cliff edge as shown on each map was digitised. The difference between 1874 and 2013 was then measured at twelve points at 50m intervals, along lines perpendicular to the average angle of the stretch of coastline studied, and an average taken.

Our calculations give the rate of coastal erosion at Birling Gap to be 58cm per annum – a lower estimate than that generally quoted, and of previous studies. However, taking into account the events of the start of 2014 and the further retreat of the cliffs we can assume that this figure would be slightly higher if calculated with mapping accurate as of now.

As an aside, the annual rate of retreat appears to be quite variable over the time periods studied, with a general upward trend. The most active period occurred between 1927 and 1960.

Using our estimate it seems that the most prominent building at the site – the Birling Gap Hotel – will begin to topple off the edge in 40 years’ time, and that the demolition of the ice cream parlour and sun lounge appears to have bought it a reprieve of around 20 years. It should be enjoyed while it lasts though, as in 93 years’ time the land beneath the hotel will have vanished completely – quite amazing for a building that started life almost 100 metres from the cliff’s edge.