Expert predictions: What will Brexit mean for house prices?

Whether you’re a staunch remainer or avid Brexiteer, there’s no denying that the UK’s impending exit from the EU (Brexit) has caused property market jitters.

Last Wednesday, the government survived a no-confidence vote following an unequivocal rejection of Theresa May’s proposed Brexit deal the previous evening. Unsurprisingly, the ongoing turmoil at Westminster isn’t doing anything to calm nerves in the property market, but this is nothing new.

Taking a long look back, house price growth plummeted following the referendum in June 2016; then in September 2018 Bank of England governor Mark Carney warned that a no-deal Brexit could send house prices tumbling by a third.

So, with just over two months to go until Brexit, what’s likely to happen to mortgages and house prices between now and then – and after we leave the EU?

Here, we analyse market activity before and since the Brexit referendum and give you the insider’s guide to what experts from the estate agency, building, mortgage and buy-to-let sectors think will happen over the coming months.

House prices did stagnate for a while following the referendum in June 2016, as you’ll see in the chart below. This could well have been down to the usual pattern of prices growing in spring and plateauing over summer, which we also saw in 2017. 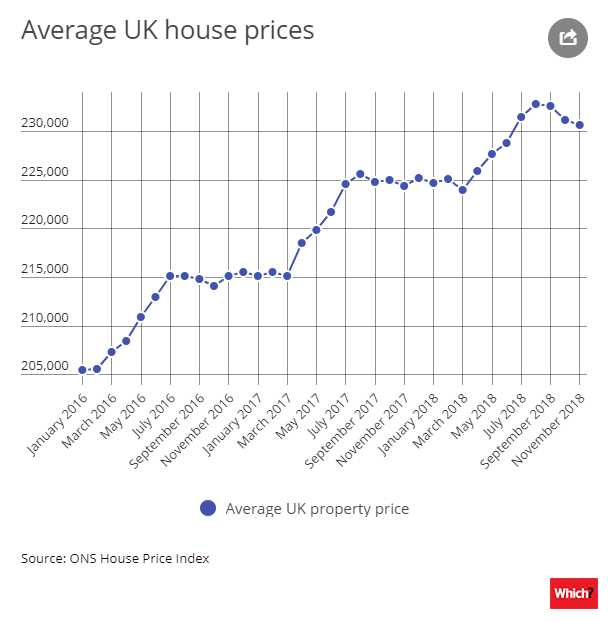 Looking at year-on-year house price change over the longer term can be another useful way of understanding what the market’s doing. The chart below shows what the rate of growth has been each June since 2014, and we’ve added a figure for November 2018 (the latest month available from the ONS) so you can see the most up-to-date info too.

As you can see, the rate of house price growth plummeted in the year after the referendum everywhere in the UK except Scotland. It has continued to decrease in England ever since, although it’s begun to pick back up in the other nations.

It’s worth bearing in mind that, while the rate of growth has decreased, house prices themselves haven’t – and many argue that the slowdown is simply a long-overdue market correction. 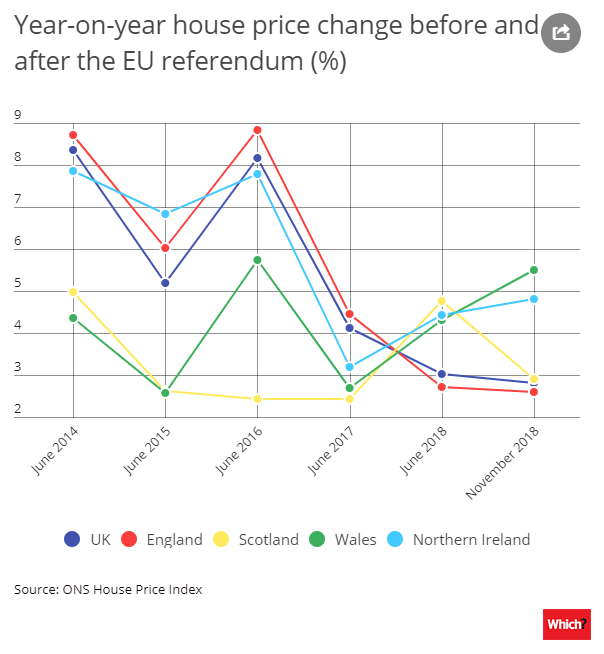 Another way of judging the health of the housing market is to look at transaction volumes, meaning the number of property sales in any given month. A lower number of sales can indicate market uncertainty, which is often triggered by events such as an election or a referendum.

As you’ll see in the graph below, the referendum didn’t seem to have much of an impact on transaction figures.

The big spike you can see was caused by the April 2016 introduction of a 3% stamp duty surcharge for buy-to-let investors and people buying second homes, with thousands rushing to buy just before the change came in.

After the April transaction crash, numbers slowly crept up again. According to HMRC’s most recent seasonally adjusted figures, there were actually more house sales in December 2018 – 102,330 to be exact – than in the same month the year before (98,760). 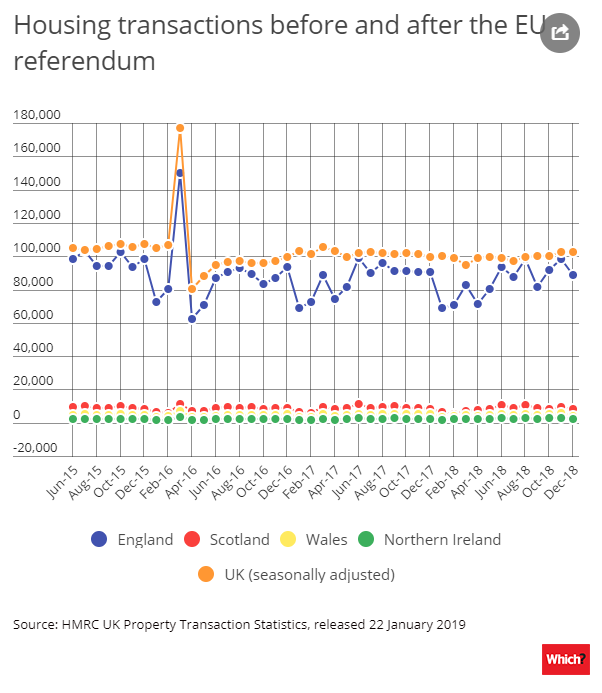 Two commonly used measures of how the market is performing for sellers are stock per branch – which is the average amount of properties on each estate agency’s books – and time to sell.

The chart below shows that the time to sell has gone up both month-on-month and year-on-year recently. In November, Rightmove reported that it was taking properties an average of 65 days to go under offer, compared to 62.5 at the same time in 2017 – and this could be partly due to nervousness around buying a home in the run-up to Brexit. 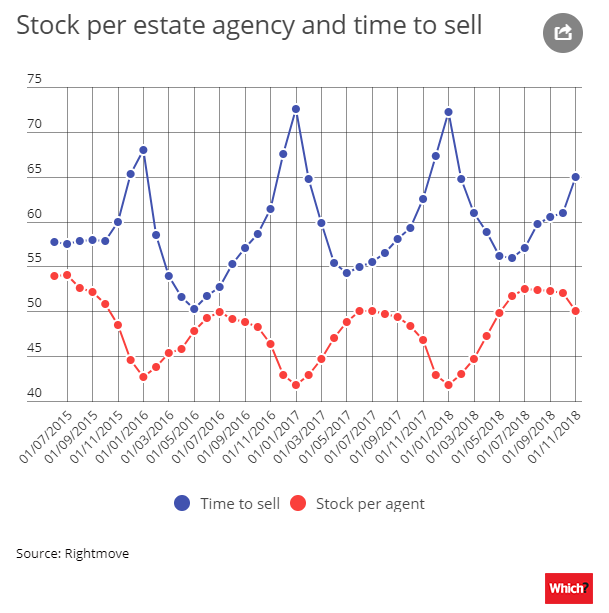 ‘I’m sure many people are waiting until we know more about whether the UK will leave with a deal, but this could go on a while and it’s tough putting your life on hold for an unknown.

The property pundit: ‘If you want to live there long term, buy now’ – Kate Faulkner, housing expert and founder of propertychecklists.co.uk, says:

‘We’ve definitely seen a stagnation in the market over the last year in areas such as London, the South and East (which had all overheated) and this slowdown has spread to other areas over the last few months.

‘In terms of the buy-to-let sector, demand from landlords has already reduced so it’s unlikely we’ll see further falls this year. And, while tenant fees are being banned from June, rents are likely to rise further due to lack of stock, meaning now isn’t a particularly bad time to be a landlord as long as you really understand your objectives and whether the deal stacks up both now and in the long run.’

‘Brexit is undoubtedly causing uncertainty in the housing market, which in turn affects sentiment and decision-making – and last night’s vote added further uncertainty to an already uncertain marketplace. 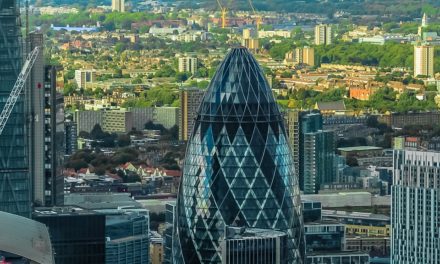 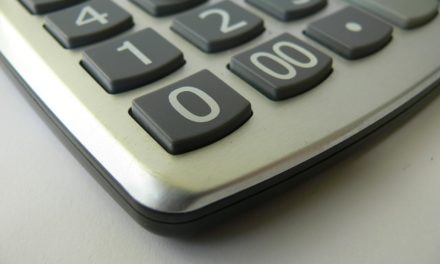 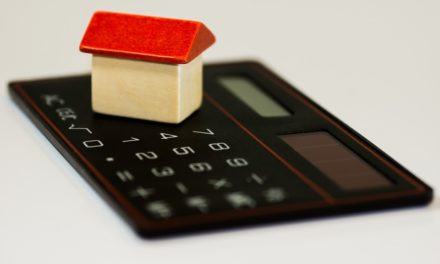 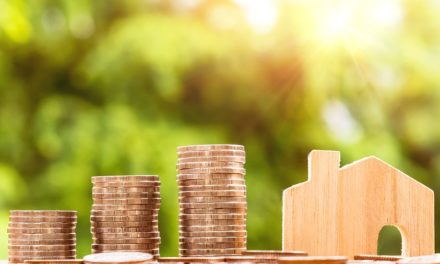 Average deposit needed by first time buyers in UK is now above £50,000