The Reallymoving Housing Price Forecast is published today (13 September), and shows that the autumn housing market settles into period of slower growth.

The housing market in England and Wales is settling into a calmer period of growth as the impact of the stamp duty giveaway works its way out of the system and the post-lockdown surge in demand begins to subside, according to the Reallymoving House Price Forecast August 2021, released today.

Completed house prices will increase by +0.7% over the next three months (September to November 2021) based on deals agreed this summer, with low mortgage rates and new flexible working arrangements continuing to drive demand over the longer term.

Conveyancing quote volumes returned to more normal levels for the time of year last month and remain unchanged in August, further indicating that buyer demand is settling back down following an extraordinary period of housing market activity and growth. 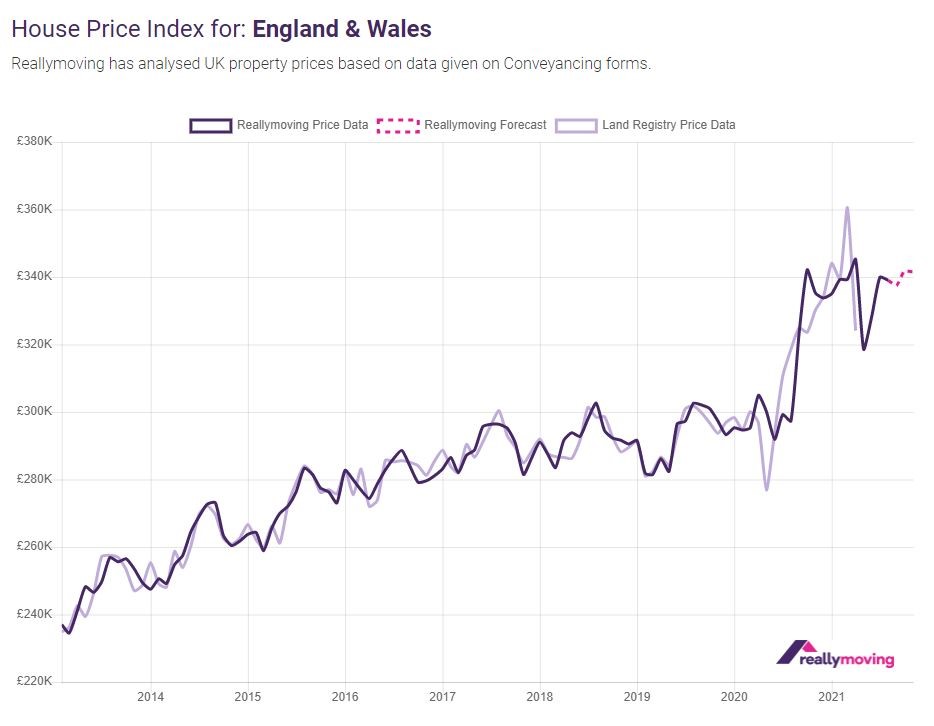 House prices will dip marginally in September (-0.5%) as a result of deals agreed in June, when buyers were forced to factor in the cost of paying stamp duty once again, constraining budgets. However, this dip was short-lived with prices agreed between buyers and seller rising again once the stamp duty holiday deadline passed – likely to be in part due to limited supply of new properties coming onto the market creating greater competition for homes. When those deals complete in October, prices will rise by +1.3%, before flattening out to -0.1% growth in November when the average house price will be £341,492.

Annual house price growth has been comfortably in double digits for most of the last year but we’re now seeing growth slow to more normal levels. Prices will be 4.3% higher year on year in September, with almost no change in October (-0.1%) and a +1.9% annual gain in November. These figures are impacted by a frenzied period for the housing market last autumn which saw prices surge in October and November, yet it’s clear that recent growth in house prices has been sustained and looks set to continue through the remainder of this year.

“The rate of house price increases over the last year has been remarkable but it’s been a difficult period for First Time Buyers and we welcome a return to more stable levels of growth. The housing market is in good shape heading into the autumn as the impact of the stamp duty holiday works its way out of the system, demand returns to more normal levels and once again the market proves its underlying resilience.

“Competition among cash-rich mortgage lenders has reduced borrowing costs to record lows, alongside a strong economic recovery and jobs market – all of which are boosting consumer confidence and prompting people to make their move now and take advantage of five-year fixed rate deals available at less than 1%. While interest rates stay low and supply remains constrained, despite monthly fluctuations the overall market trend will be steadily upwards.”