The Conveyancing Foundation has donated £1500 to help improve a little girl’s life from funds raised entirely through its innovative Charity Lotto.

The charity gave the funds to an appeal for a new prosthetic foot for the four-year-old from South Wales who was born without a right foot.

Little Scarlett Davies currently uses a basic NHS prosthetic but her family are determined to change her life by raising money for a more realistic one. 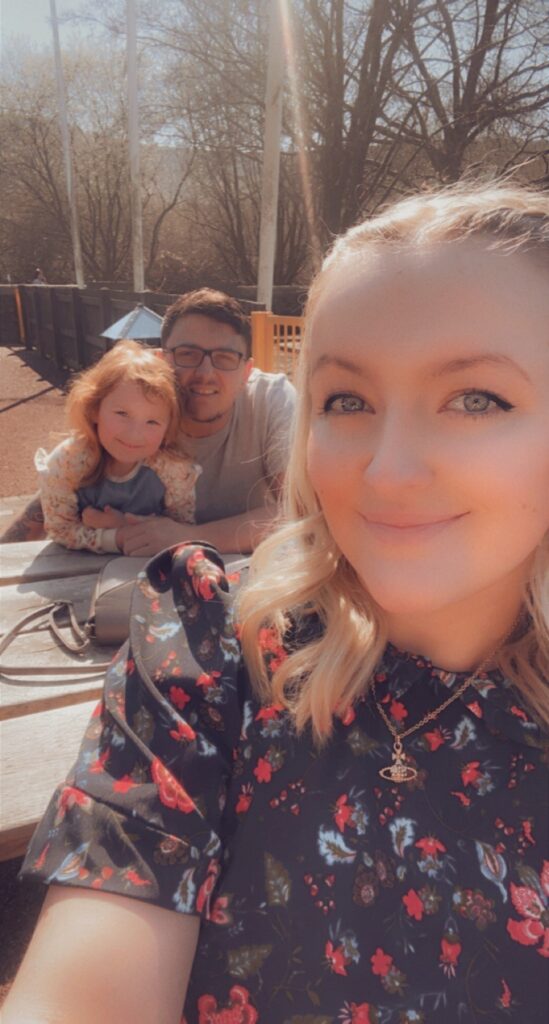 Little Scarlett Davies with her family, Aaron and Chelsea

Stepmother Chelsea Carey, a conveyancer at Convey Law, explained that as Scarlett was getting older, it was becoming more important to help her have as normal a life as possible.

“When she was born, no-one knew how her missing foot would affect her and didn’t know how she would ever be able to walk. But one day, when we were standing there minding our own business, she just stood up and started walking. We were amazed!

“But as she got older, she could clearly see she was different. One day, at an outdoor splash park, she wasn’t wearing her prosthetic as it couldn’t get wet, and children, as they do, were walking past and staring at her and asking their parents ‘what’s wrong with that girl?’. Although she is small, she is so, so smart, and could hear and take in everything other people were saying. She just wanted to go home and did not enjoy the trip one bit.”

The family then decided that raising funds for Scarlett to have a realistic prosthetic would be life-changing and launched a £6000 fundraising appeal.

The Foundation, which raises money for charity through its Charity Lotto where clients of any legal practice or property firm can donate a voluntary £10 at the end of their transaction, giving them a chance to win £500 in a monthly draw, was one of the major donors to the appeal.

“When we heard about little Scarlett and how dedicated her family are to improving her quality of life, we were moved to help and give a donation the appeal. The funds were made possible through our Charity Lotto.

“Thank you to all the clients of Convey Law who have taken part. Even if they did not personally win the monthly draw, I want them to know what incredibly worthwhile causes the money they have helped to raise go to.”

The Foundation also helps other firms to set up their own Charity Lotto to raise funds for charities they wish to support. It has helped firms raise over £800,000 for their chosen charities in the last decade.

“We are very keen to help others fundraise for their own charities through our Charity Lotto. It’s a simple idea which most clients are happy to support when they are buying or selling their house but its end results are incredibly powerful as you can see in Scarlett’s case.

“We are dedicated to helping any other company that is interested to set up their own Charity Lotto and start fundraising for the causes they care about.”

Scarlett’s Dad Aaron Davies said the Foundation’s donation had now helped them to smash their original target and enable them to pay for a new foot and for further ongoing treatment.

“It was absolutely the most generous donation we could have wished for. The money we have raised will now fund not just one prosthetic and consultations, but another prosthetic when she grows out of that one in the next 16 months. She is honestly so excited to have this, it’s all she talks about.”

The Conveyancing Foundation can be contacted for further information on setting up a Charity Lotto at info@conveyancingfoundation.org.uk or 01633 261794.