Kate Goodall is the Commercial Consultancy Manager at Groundsure. In this blog, Kate takes a look at ancient landfill sites and the insight they can provide on ancient life. If you have any comments on questions about this blog, you can contact the commercial consultancy team at commercial@groundsure.com. 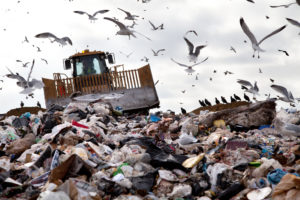 Rubbish dumps, refuse heaps, landfill sites – nothing but a load of old rubbish, potentially harmful rubbish at that, or are they?

More modern landfill sites are a cause for concern as they are likely to lead to land and groundwater contamination. In addition, gasses that emanate from them are harmful to human health and an explosion risk. But what about ancient human rubbish dumping grounds? Can they unlock secrets of everyday life in ancient times?

The most famous and well-reported archaeological sites, such as The Great Pyramids or The Colosseum gain the most press coverage; however, one of the most informative archaeological sites ever discovered isn’t a pyramid or a temple – it’s a huge rubbish dump, discovered at the site of the ancient Egyptian city of Oxyrhynchus. It has brought to light many clues that give an insight into life in this city dating mainly between 1st century BC to the 7th century AD. The dump, which was originally thought to be a sand dune, was discovered by Victorian archaeologists in January 18971 and the more than 500,000 fragments of papyrus that were unearthed now reside in the Sackler Library in Oxford. Between 1898 and 2012 scientists had only managed to transcribe just over 5,000 of the 500,000 documents. However, in 2014 a scheme was put in place to get members of the general public or ‘citizen scientists’ involved in helping with this herculean archaeological task, increasing the number of transcribed documents into the 100,000s.

The results are fascinating – from a 3rd Century doctor’s report, an extract from Andromeda (a lost tragedy first produced in 417 BC), to a fragment of a long-lost rendition of the Book of Exodus.  There is a lot to learn about life in this city from its rubbish. The most fascinating items are fragments of letters to and from citizens in the city: correspondence between brothers offering help and asking for news of well-being; letters between friends airing grievances and love-letters between husbands and wives2.

Many other ancient rubbish dumps have become a source of insight into information on ancient life. The worlds biggest ancient rubbish dump3, Monte Testaccio in Rome, comprises millions of stacked vessels previously used for transporting olive oil. Whilst perhaps quite mundane at first, this rubbish dump has provided a fascinating look at how Roman economy worked and different trade routes active in ancient Roman times. This information is gained from examining markings known as ‘tituli picti’ on the jars which outline where the oil came from, taxes paid on it, quality control marks and sometimes the maker of the jars4. Not for the squeamish is an ancient dump in Italy – an excavated cesspit beneath the ancient town of Herculaneum,5in the modern town of Ercolano, Naples. Aside from many fascinating artefacts unearthed, the organic material, itself excavated from the cesspit, revealed the everyday diet of a Roman citizen. Seeds, bones, shell fragments, and other remains found in the organic matter suggest Herculaneum residents had a diverse diet, which included chicken, mutton, fish, figs, fennel, olives, sea urchins and molluscs5.

So, what would our future counterparts find if they were to sift through our rubbish to get a peek into life in this century? With the diverse and complex rubbish produced these days, it’s hard to fathom. Most personal correspondence is carried out electronically and recycling is becoming more and more prominent. Perhaps there wouldn’t be a lot worth studying? The latest waste data from the Environment Agency (EA) shows that reliance on landfill in England and Wales continues to decrease, with significant increases in inputs to other treatment facilities, particularly materials recovery and incineration plants6. There is also a growing movement towards zero-waste lifestyles. In fact, the UK’s first zero-waste restaurant in Brighton opened in 2014 and is still going strong. Producing fantastic food, the restaurant recycles 99% of its waste, has an in-house special compost machine, supplies are delivered in reusable containers, ingredients are being sought from (mostly local) farmers and producers direct, flour for the restaurant’s bread is milled on site and alcohol is brewed in the basement7. Is this a sign of things to come?