A team of residential property conveyancing lawyers and support staff from Yorkshire have raised £2,888 in a charity fundraiser that supports anyone affected by the death of a baby.

Six people from LCF Residential, which is part of LCF Law, each ran or walked 50 miles during the month of March raising £1,444 in sponsorship from family, friends and colleagues. LCF Law matched the amount raised, doubling the donation to Stillbith and neonatal death charity (Sands). 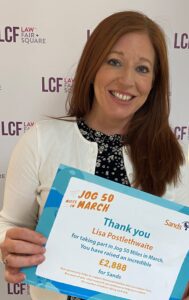 “My baby was stillborn in 2017 and I found the support that Sands provided to my family and I invaluable.

“I was keen to fundraise for the charity, which relies wholly on donations, and thought that a team challenge with my colleagues would also be really good for everyone’s mental and physical health. We formed a WhatsApp group and people shared their runs via the tracking app, Strava.

“The best part about the challenge was that you could run, jog or walk your daily miles, so it was really inclusive, and it was something we could do on our own or with our colleagues. Despite us all having many demands on our time, because we were doing this for Sands, it made everyone accountable, and nobody missed a day. As well as raising the much-needed money, another benefit was it encouraged us all to switch off and get outside. We all had a common goal and felt part of team doing something special, which was great for moral.”

The ‘Jog 50 Miles in March’ campaign raised over £1m nationwide and that money will be used to make sure everyone affected by the loss of a baby gets the support they need. It also allows the charity to continue its campaign for change and fund research, so that fewer babies die.

“We want fewer families to experience the pain of losing a baby and we certainly don’t want them to face that loss alone. Losing a baby is a devastating tragedy and the money that Lisa and her colleagues have raised will go towards running our countrywide network of regional support groups, which offer free regular support meetings to anyone affected by the death of a baby, as well as support our work to understand why babies die, and save lives.”

“The support groups and Facebook groups are immensely helpful. The loss of my baby was totally unexpected and the information and community that Sands have given me access to has made a real difference.”